Am I Speaking with a Robot? 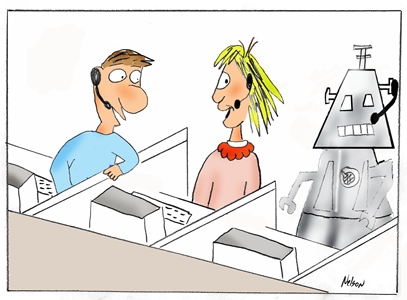 Over the past couple weeks, we wrote a two-part blog post that centered around a poor interaction with a mystery company where it turned out that part of the problem was a lack of training (even with “management”!). When asked to vote on the company’s identity, some of the respondents said that they voted Apple because their “service is scripted.” I found this very interesting because for a company like Apple, who prides themselves as industry leaders in CX, to use (identifiable) scripts seems like a cardinal sin.
Coincidentally, while we were collecting your votes, I participated in a Tuesday evening Twitter #custserv chat where the apropos topic was “Customers don’t like scripts, why do we still have them?” The answers from fellow CX practitioners were enlightening: nearly every attendee said they can always ID a script and that it has a negative affect on their expectations. But many also said they found them helpful as a training tool. So when is a script no longer welcome?
The issue is, if you can ID a script immediately, the perceived level of service quality plummets. Companies need to empower employees to address the situation but also maintain brand values. Train staff with a framework for key phrases (like “please” and thank you”) but eliminate human-to-corporate-robot interactions by avoiding purely scripted lines.

#custserv A1 Scripts fry my fritters quickly…I need to be dealt with on a more personal level. I get out as quickly as I can

A1. I have said, "Please stop reading and listen to me." #custserv

Often times, a company’s marketing communications create expectations that don’t align with how a customer is actually treated. This was the case with our previous Apple story– not only was the issue that a customer’s time was wasted but this also wasn’t the expectation set by their branding. A premium brand shouldn’t waste a customer’s time with 1) a faulty product and 2) a flawed, disorganized method for fixing the product — they should have the best-of-the-best processes in place to make sure a customer is set up for success.
When a customer interacts with a rep, whether it’s in person, on the phone, or online, scripted lines are not going to help the situation. They can guide the conversation by collecting formalities (account number, name, etc) but don’t let scripts dry up the dialogue (and incense an angry customer even further).
Because while scripts provide consistency, they also eliminate the rep’s power to think and act freely to resolve a situation. I understand that large corporations have many moving parts that “require” some level of hand-holding, especially when a call-center is outsourced. But that’s where a script often gets its wrong— a lot of the positive reasons to use a script go away when entering into unique situations or reaching across global lines.

#custserv A3a…If I am is #custserv and I am given a script I feel I am not trusted to do the best thing for customers and company.

The problem is that staff (likely due to their company culture) often rely on scripts as a crutch instead of using a guideline for direction and steer the conversation to a positive outcome. If an employee only knows how to follow a pre-written set of instructions, they won’t be able to act fast to put a customer at ease. Instead, they will be scrambling for where to look next on their screen that may not have an applicable phrase or scenario. Bullet points, as pointed out below, are a great way to provide flexibility.

A3: We use bullet points to make sure we cover everything. Not scripts! #custserv

Staff need to be trained to deal with a wide variety of situations, requests, and complex scenarios. Providing helpful direction is the crux of any training regimen. But companies, especially B2B who rely on monthly subscription renewals, cannot chuck a script over the wall and expect success.
There also needs to be some level of trust within an organization that employees can use their judgement in speaking with a customer. Forcing staff to say specific things and dig for answers may not always apply– I’m thinking of the viral Comcast call where a customer wanted to cancel and the rep HAD to know why. This was apparently what he was trained to do.
So it may take more time to find the right people to hire and train them adequately, but setting this up in the beginning will propel customer success along the way. Good things come to those who….train properly?
[blockquote3]How do you alleviate the use of scripts? Or maybe you disagree?[/blockquote3] Comment below!
For more thought-provoking content on customer loyalty, experience and success, join other thought leaders in a #custserv chat and see for yourself— today’s topic is “Minimizing customer effort: Making it easy to do business w/ you.”
#custserv Twitter chats occur every Tuesday @ 6 pm PT/ 9 pm ET. Follow the moderators @marshacollier, @alhopper_, or @royatkinson for a weekly reminder!