CX Fail! Can You Guess Which Brand is the Culprit?

I’m going to relay a personal experience from this past weekend, and ask you to guess which brand was responsible.  To sweeten the incentive to vote, you can also win an exciting new book!  Here goes…
My wife bought what can be considered an “upscale brand” item about 2 years ago.  Several months following the purchase she experienced some intermittent problems but continued to live with the issue for all this time.
A few weeks ago I chanced upon an article that explained the manufacturer has issued a recall for what they found to be a defect.  The article directed to her to the website, where she entered in some registration information and discovered that her item was covered by the recall and directed us to a service center.
We arrived for our Saturday appointment and pleasantly greeted by the service rep.  After several minutes of clicking around the rep let us know the procedure:  the replacement part is out of stock so we would need to come back after we’re notified.  I responded, “Whaaaat?”
He explained, [blockquote3] “Turns out there was a higher demand for this than we expected, and the part is out of stock.”[/blockquote3]
I responded, [blockquote3]“We drove 30 minutes to get here.  We made an appointment.  You knew we were coming and why.  Now we need to come back?”  [/blockquote3]
He reiterated that there was nothing he could do, and offered to have me speak with his manager.  I agreed. So Leo-the-manager came over and  I explained the situation.
Leo: [blockquote3]“I’m sorry we’re out of that part.  You’ll be notified when it’s in stock and you are welcome to come back at a time when it’s convenient for you.”[/blockquote3]
Me: [blockquote3]“You’re not hearing me,” I said.  “We drove 30 minutes to get here and why didn’t you let us know that we would have to come back?  This is a waste of my time, don’t you think?” [/blockquote3] Leo responded that by having us come in they were able to start the paperwork so it really wasn’t a waste of time. (Could that not be handled over the phone or via an online form??)
I suppose I overreacted, but my expectation was entirely different.  This was a premium brand, for a recall they’ve known about for some time.  They put the burden entirely on me and didn’t try to proactively address the situation.  I let him know I was unhappy.
I ended the experience with, [blockquote3] “Leo, is this the way you treat customers?  Not even an apology?” [/blockquote3]
Leo oh-so-eloquently responded, [blockquote3] “If you recall, my very first statement to you was, ‘I’m sorry we’re out of the part.’” [/blockquote3] 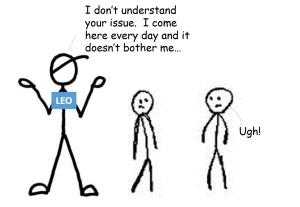 If you’ve read this blog then you know that’s not a way to apologize to a customer (here’s the right way). We walked out angry, and resigned ourselves to the fact that we’d just have to drive another 60-minute round trip in the near future.
Recall this was Saturday, around mid-day.  Later that evening my wife received an email… the part is now in stock and she can come back any time in the next 5 days for the repair.  After that, the part will be placed back in inventory and she’d need to start the process again.  She also got a survey asking, “How’d we do with your recent service experience?”  You can be sure she was completely candid in recounting the negative experience.

So now for a little informal research — Can you guess where this experience happened?

I’ll reveal who the “brand” is after I close this survey next week — please vote below: