There’s a lot of debate around Net Promoter Score® (NPS) as “the ultimate question.” In the meantime, companies continue reporting customer satisfaction scores with NPS and with aggregate averages. These discussions miss the mark. The point should be to drive improvement:  if you aren’t taking direct action on the results, then you are actually losing ground to your competitors. So what metrics can help drive that focus on improvement? 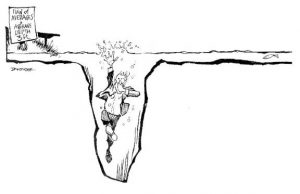 Never cross a river that is an average of 2 feet deep. Focus on the areas that matter, not the average.

Start by telling the story. How would you tell an executive in 30 seconds or less what a “7.78 average satisfaction rating” means? On the other hand, executives should react if we tell them that only 38% of the company’s customers are Promoters, and that the differential annual value between a Promoter and a Detractor is $162 (as a real-world example of a B2C company we recently worked with). Armed with this knowledge and with understanding of what creates Promoters and Detractors, executives can make good decisions and also gain a leading indicator of progress by watching the % of promoters grow in their segment.

The background research for Net Promoter was based on a series of longitudinal studies that examined actual customer behaviors associated with their feedback (documented in Reichheld’s book, The Ultimate Question, and in dozens of case studies over the years). The beauty of Net Promoter isn’t in the score – its strength lies in its ability to easily communicate action plans based on a proven segmentation strategy. It turns out that customers who rate you as less than 9 (on a 0 to 10 scale) are actually not with you (i.e. they aren’t “Promoters”), and they are prone to go elsewhere with their money. Prior to the research in Fred’s book, conventional wisdom found that a score of 5 on an overall satisfaction or recommend question was “neutral” and therefore “ok” and so an average score of 7.78 was generally perceived as good.
However, we all know that a focus on a score, including NPS, is missing the point. A single metric always focuses the discussion on scores, while a focus on improvement and the resulting financial metrics would better serve the business. Reporting averages makes action even more difficult. Take the first step by simply reporting “top box” scoring (% of customers that score a 9 or 10) and see what dialogs result. What percent of your customers are really with you?
Note: This post also proudly published on Allegiance Blog